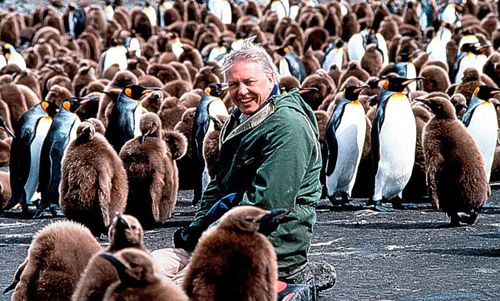 Sir David Attenborough : A Man For All Seasons

Sir David Attenborough: A Man for all Seasons

From my archive of iconic interviews spanning the last fifteen years – An in-depth interview with Sir David Attenborough, looking back of a life less ordinary, reporting from the most remarkable places on earth.

He may be 90, but David Attenborough has lost none of his enthusiasm and passion for the natural world. In an exclusive interview, he tells Alison Jane Reid why he will never retire…

Rain has begun to fall as I arrive at Sir David Attenborough’s 19th-century cottage in Richmond. ‘Come in, come in,’ he says, ushering me into a sitting room littered with books and his beloved fossils. The famously hushed yet excitable voice is as hypnotic as ever, and I feel a little overwhelmed – Attenborough’s programmes have done more to connect us to the natural world than anything else.

At the pinnacle of his achievements are the nine series of his celebrated BBC ‘Life’ documentaries – from Life On Earth in 1979 to Life In Cold Blood, aired this year. Collectively, they form a survey of all terrestrial life and on their own would secure his position as one of the most remarkable cultural historians of our times.

‘It’s taken 20 years to complete the series,’ he explains. ‘Only the BBC would give you that time and support – that continuity of employment.’

Though he admits he’s a technophobe, David is clearly passionate about David Attenborough’s Life On Land – a new set of DVDs that includes six series of the famous Life documentaries arranged to form an interactive encyclopaedia. Viewers will be able to look up a certain species and call up the relevant footage on to the screen at the click of a button. ‘It’s very exciting,’ he says. ‘It will be a great way to make the natural world more accessible to modern audiences.’

Aside from an obvious fervour for what he does, the wonderful thing about David is that, in an age obsessed with celebrity, he isn’t the least bit interested in the razzmatazz. ‘I didn’t plan to have a career in television, it just came along,’ he says. ‘I was always going to be a palaeontologist.’

David’s affinity for the natural world began early. His father, Frederick, was principal at University College Leicester and his mother, Mary, was a linguist – a rather intrepid girl who took herself off to Bologna University in the years before women even had the vote. ‘It was amazing for an English girl to go to an Italian university in 1912 – quite how she got there I don’t know,’ he says. The young David grew up in an atmosphere of intellectual curiosity, roaming the Leicestershire countryside for fossils. ‘I would get on my bicycle and not come back until the evening. Sometimes I would go off for two weeks and go youth hostelling, which was marvellous!’

He paints a picture of Britain before World War II as a time of both austerity and freedom – something sadly missing for today’s children. Both his parents had an acute social conscience: ‘I remember seeing my mother on her hands and knees scrubbing Evington Hall – a disused house – in order to accommodate 150 refugee kids. When war broke out they also took in two Jewish girls. “Now you’ve got two sisters”, they said to me.’

David is certainly a product of those times, and the closest thing we have to a modern renaissance figure. He is urbane and modest, with a wicked sense of humour. ‘For me, there has never been anything funnier than Porridge or Monty Python, and I enjoyed The Office. But there isn’t much else that makes me laugh,’ he says.

Venturing on to more personal ground, I ask David about his adored wife Jane. They were married for 48 years until her death in 1997 while he was away on a trip, which he has talked about with regret. I ask him if it was love at first sight? ‘Come on, at 18 or 19, isn’t it always love at first sight? I mean, it’s one every 10 days isn’t it?’ he laughs.

Perhaps the only time he is in the least bit guarded during our interview is in speaking about his family. He met Jane at Leicester University when she was taking a degree in social sciences, and they married in 1950. Like any couple starting out, money was tight. David’s first job paid the princely sum of £350 a year, and their first home was a tiny house in Chelsea. ‘It leaked like a sieve,’ he recalls. ‘London was just recovering from being bombed. So when our son Robert was born, we moved to Richmond.’ Robert is now a senior lecturer in Bioanthropology at the School of Archaeology and Anthropology at the Australian National University in Canberra. Robert’s younger sister, Susan, is a retired primary school head, living in Surrey.

So did he find it hard being away from his family so much? ‘Well, I was only away for three months of the year – it wasn’t as much as a pilot or a sea captain,’ he says. ‘They weren’t trips for children, and Jane wouldn’t have wanted to come as just a passenger, so they always stayed at home. The important thing was making the film – my family understood that.’

David walks with a slight limp these days, but insists it isn’t a legacy from his adventures. ‘Human beings are more deadly than any animal,’ he says, adding the only time he has ever felt frightened was when he was confronted by a drunken soldier in the Congo. ‘When they’ve got a gun, don’t like the look on your face and don’t speak your language – that’s the time to get apprehensive.’

Shell-shock and Privilege at Cambridge after World War Two

I’d quite like to be with Attenborough if I was in a dangerous situation – I’m sure he would negotiate his way out of trouble. He was 13 when war broke out, and he conjures up an intense picture of life at the time. While his elder brother Richard won the prestigious Leverhulme Scholarship, went to RADA and then on to glory as an actor and film director, David won a scholarship to Clare College Cambridge to take a degree in Natural Sciences. He describes the atmosphere as wonderful, but ‘shell-shocked’ following the aftermath of war. ‘My overwhelming feeling was one of privilege. I was lucky to escape active service – many of my fellow students had piloted fighter planes and commanded destroyers.’

After leaving Cambridge he was conscripted to do National Service as a Navy officer. ‘It was a bit like a Carry On film. I went off to Pembrokeshire and The Firth of Forth. Because I had a science degree, I became an instructor and taught navigation and meteorology. It was great. You weren’t shooting at anyone and no-one was shooting at you. The war was over. But after a couple of years, I wanted to go out and earn a living.’

After a brief – and, he says, dull – stint editing children’s science books, he applied for a job as a BBC radio producer. He didn’t get it, but several weeks later he received a letter inviting him to go and work at Alexandra Palace in ‘this new thing called television’. The year was 1952 and, like most Britons at the time, he didn’t own a television. ‘But I thought it sounded like fun. In those days, they were actually trying to persuade people to join television!’ After a decade producing programmes, David was made controller of the brand new BBC Two and was even responsible for the introduction of colour television. ‘It was a marvellous privilege. I was given several million pounds of budget with the remit to set up an entirely new network,’ he recalls. (In case you didn’t know, he also gave us Match Of The Day, televised snooker and The Likely Lads.)

Even at 82, David’s work is still a huge part of his life and, fortunately for us, he has no intention of retiring – ever. ‘If you have a paid job with a pension, I suppose you might retire. But if, like me, you’re freelance and want to go on working, then you just do! I don’t know what I’d do if I stopped,’ he says pausing to contemplate the idea. ‘I would just go to seed.’ As if to illustrate his point, last night he was in Aberdeen to receive ‘another honorary degree and give a lecture,’ obviously delighted that he’s still in demand. He’s also thoroughly immersed in his next project for the BBC – a documentary about Charles Darwin and evolution to celebrate the bicentennial of Darwin’s birth in February 2009.

So is there anything he still wants to do or achieve? ‘No,’ he says decisively. ‘Now that I’m in my 80s, I can’t climb trees or walk for six hours at a stretch. Your appetite for these things changes according to your abilities. I don’t yearn to go on long route marches anymore, because I know I can’t.’

The Loss of Entire Ecosystems

Not surprisingly for someone who has had an extraordinary front seat on the natural world for the past several decades, Attenborough has become increasingly outspoken on the impact  of man on the environment. For the first time in the interview, he is sombre. ‘I am as keen as anybody that we shouldn’t lose the mountain gorilla or the giant panda, but it is really whole ecosystems we should be concerned about. The loss of species is just a token of something much bigger. The air we breathe and the food we need to live on are dependent on the ecosystems we’re losing.’

If there is one person on the planet who can galvanise the masses, it must be David Attenborough. Although, as modest as ever, he still insists that his extraordinary career is mostly down to good fortune. ‘The element of luck is so profound, so enormous. I wouldn’t mind tuppence if I never appeared on television again. But I would mind if I couldn’t make programmes anymore,’ he says.

It is said that he is the most travelled person on the planet. So is there any animal or place he thinks he has missed out on? ‘Well, bearing in mind that there are something like six billion species, I certainly haven’t seen a millionth of them. I haven’t swum with a whale shark and I haven’t been to Tibet. Those are the two things I would have liked to do.’

Passionate, courteous, a national treasure who can turn nature’s mysteries into universal entertainment… As our interview ends, it’s tempting to think that Attenborough himself might be a dying breed. Telling myself off for exaggerating, I put on my raincoat and get ready to leave – and then Sir David Attenborough proves my point and insists on escorting me to the bus stop. 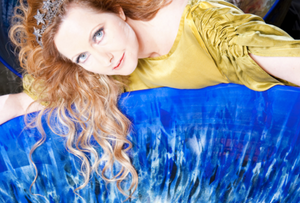 A Story About Made in Britain, Poverty, Art and Ethical Fashion! 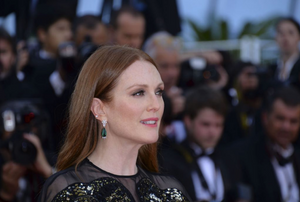 Fashion is Broken! Julianne Moore, Patagonia and the Rise of Slow Fashion!

January 19, 2022
Comments
×You've successfully subscribed to The Luminaries Magazine
×Great! Next, complete checkout for full access to The Luminaries Magazine
×Welcome back! You've successfully signed in.
×Unable to sign you in. Please try again.
×Success! Your account is fully activated, you now have access to all content.
×Error! Stripe checkout failed.
×Success! Your billing info is updated.
×Error! Billing info update failed.